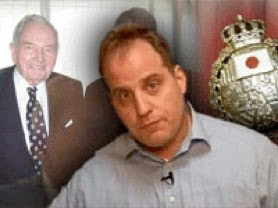 Former Forbes Asian Bureau Chief Benjamin Fulford expressed views on Fukushima disaster in a May 25th interview with Jeff Rense. An upset and agitated Fulford reports that a nuke recovered from the sunken Russian sub Kursk was used to create the 3/11 tsunami. Fulford informs rogue intelligence actors tied to Zionists behind the act. A journalist living in Japan named Henry Kissinger, George H.W. Bush, David Rockefeller and Jay Rockefeller as some of the perpetrators behind world's woes. The former Asian Bureau Chief goes into detail on how a nuclear weapon was put in place "... it was transferred onto the deep ocean drilling vessel, the Chikyo Mara. And you won't be able to find newspaper articles in Japanese saying that the Chikyo Mara was drilling a hole right at the epicenter of what became the earthquake, starting January 17th of this year. They drilled down 10 kilometers into the seabed, and they put the (stolen from the Kursk) atomic weapon there..."

Fulford explains the motive behind the nuke as "...an attempt to pry the Asian money out, through terror" and sees extortion on a global scale to continue "...and right now I am hearing these same rogue actors are planning a nuclear terrorist attack in Europe." There is more as Fulford describes global tensions at highest and as scramble for last good money, worldwide! Fulford compares situation to cartoon character Roadrunner, who is still running after going off a cliff and yet to realize no longer on solid footing! It's not a bad comparison! You can hear the May 25th Benjamin Fulford interview with Rense on You Tube.