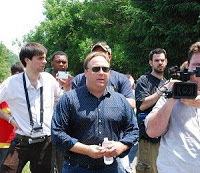 from epoch times: While over a hundred of the most influential people in the world are believed to gather at the Westfields Marriott hotel in Chantilly, Virginia, for several days (June 5–8) all the major media, except for the Epoch Times, are apparently silent about it. The event is an annual gathering of the Bilderberg Group... Alex Jones, syndicate radio talk show host and documentary film maker, says that he invited the Washington Post, the Fairfax Times, and asked 16 million listeners of the Coast to Coast AM radio show to call on the press to cover the event. But no major media showed. "This is a criminal group. They're involved in very bad things," said Alex Jones, referring to the Bilderberg Group. 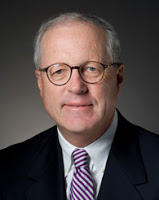 from washington post: James A. Johnson, former Fannie Mae CEO and consummate Washington insider, is leading Sen. Barack Obama's vice-presidential search process. He just conducted an early round of interviews on Capitol Hill today. But Johnson also is proving a ripe target for Republicans looking to spot hypocrisy in Obama's pledge to reject business as usual in Washington... He chaired the Kennedy Center for the Arts and is a member of exclusive clubs such as American Friends of Bilderberg, the Trilateral Commission and the Council on Foreign Relations.

from raw story: The 56th Bilderberg Meeting, an annual conference of influential politicians and businessmen, began Thursday in Chantilly, Virgina, according to a press release from the organization.

bilderberg seeks bank centralization agenda
from rogue government: Fresh off of the 2008 Bilderberg Meeting, it looks as if New York Federal Reserve president Timothy Geithner is set to push a new agenda in the world of central banking that was likely decided upon at Bilderberg. Geithner yesterday, wrote an article in the Financial Times calling for a global regulatory banking framework.