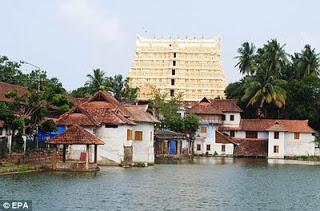 ‘billions worth’ of treasure found in indian temple

from wikinews: Officials announced that a treasure containing sacks of diamonds and gold coins as well as golden idols, jewelry and other riches has been discovered in the secret subterranean vaults of Sree Padmanabhaswamy temple, in the southwestern state of Kerala, India. Estimates of its worth have been rising and it is now thought to be worth $20 billion. The Hindu temple was built in the 16th century by the kings of the then Kingdom of Travancore to serve as a royal chapel for the rulers of Travancore. The six vaults containing the treasure have been undisturbed for over a century. Assessment of the treasure began on June 27 after a lawyer concerned about the security of the treasure petitioned India's Supreme Court, which then appointed a seven-member panel of experts to inventory the treasure. The panel does not have the power to determine to whom the treasure will belong. Estimates of the treasure's worth are rising, provoking a heated debate as to how the treasure will be used in a country that has 450 million poverty-stricken people. The chief minister of Kerala, Oommen Chandy, announced on Sunday the treasure would remain with the temple, and security matters would be decided in consultation with the Travancore Royal Family, the temple management, and the temple priest. "The gold was offered to the lord. It is the property of the temple. The government will protect the wealth at the temple," Oommen Chandy said. Meanwhile, hundreds of armed police have been deployed around the temple to protect the treasure.