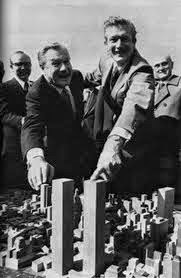 from PBS.org: Though the idea of the World Trade Center was first proposed in 1946, just after
World War II, for nearly 15 years it would remain exactly that -- an idea. When
the concept did re-emerge in the late 1950s, it would begin to move with an all
but unstoppable force, propelled above all by two men, sons and brothers of one
the most powerful family dynasties
on earth.


As much as anyone else of their time, David and Nelson Rockefeller embodied the
potent mix of pragmatic capitalist drive and visionary internationalist outlook
that underlay the new world order that America had put in place at the end of
the war. More than anyone else, they took it upon themselves to ensure New
York's role at the very center of that burgeoning commercial imperium.


Scions of the fortune established by their grandfather, the titan John
D. Rockefeller -- who had built his company, Standard Oil, into one of the
first and greatest international conglomerates in the world -- the two brothers
had in the years since the war come to hold sway over an almost unimaginable
concentration of wealth and power.