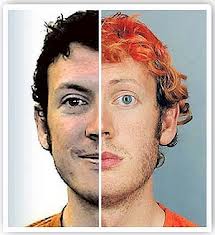 Aurora Shooting case takes bizarre turn with court filing that blames massacre on Police Chief Dan Oats, Denver billionaire Philip Anschutz and the Illuminati, according to Denver Westword blog entry.  The recent court filing takes strangeness to next level with additional accusations made by the victim below:

"Also name-checked is 18th Judicial District DA Carol Chambers, who is supposedly forcing the filer to testify as a victim against her will.  'I am not a victim' of James Holmes, the author continues, because  'he never shot me.'

So...what happened? 'District Attorney Carol Chambers & Police chief Dan Oates came to my house and told me they are going to arrest me for online prostitution and escort services and charity fraud,' the narrative continues, 'and to make a deal with them to pretend I was a victim in this case. Dan Oates then shot me, told me in places [sic] that were not life threatening.'"

The case is so thoroughly questionable, above statement doesn't seem as far-fetched as it would in a fair and just world!  The strangeness receives yet another twist with Judge William Sylvester's comments: "'the Court has information that the named victim...did not file this pleading, and it appears that someone may be filing pleadings with false names.'"
The Judge seems annoyed with bogus filling and directed to make documents public and directs copy to Sheriff's Office for further investigation!  You may find more dirt on Aurora case from Red Dirt Report.