psyop prep for denver dem convention...
from raw replay: Military helicopters flew low over parts of Denver Monday night as part of a security drill organized by the U.S. Department of Justice. Denver police said they were aware of the operation, but could provide no details. This video is from CBS 4 Denver, broadcast June 16.

denver stocking up on pepper weapons

from rocky mountain news: Denver police are stocking up on guns that fire a pepper spray-like substance instead of bullets - a less-lethal weapon used to disperse crowds - in advance of the Democratic National Convention. The department recently ordered 88 Mark IV launchers and projectiles at a cost "in the low six figures," the company that makes the weapons stated in a news release Monday. The request was for delivery in advance of the DNC, according to Louisville- based Security With Advanced Technology Inc. The convention, scheduled for Aug. 25 to 28 at the Pepsi Center, is expected to draw thousands of protesters to sites throughout Denver.

from denver post: Eight Denver hospitals held drills Tuesday to test their abilities to respond to a disaster that would injure thousands of people. The mock exercise - a "dirty bomb" explosion at a Pepsi Center packed with 20,000 people - was one of the largest-ever cooperative drills for the city's hospitals, organizers said. It comes just two months before the Democratic National Convention, when the city will host thousands of people from around the world. 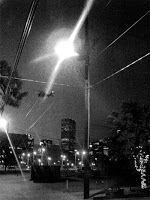 from kurt nimmo: The Rocky Mountain News, after an unflattering article on the Black Hawks — yes, tinfoil hatters, black helicopters — invading Denver, came back with a clarification. It’s all part of the GWOT, or Global War on Terrorism, in response to the reservations of mayor John Hickenlooper. “The federal agencies sponsoring the ongoing multi-agency training in Denver agreed to make the proper notifications regarding the exercises to prevent surprise and inconvenience to Denver residents,” Hickenlooper said. “There seems to have been a misunderstanding about the reach and scope of these notifications, and they did not occur in the manner expected by the City.”

clueless citizens cheer black helicopters in denver
from infowars: Talk about misunderstanding a concept. In the videos here, the citizens of Denver cheer on GWOT helicopters as they buzz skyscrapers, apparently clueless about what this means. It means the Department of Defense is free to “surprise and inconvenience” Denver residents, as the Denver Post reported. 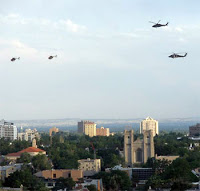 from rogue government: The terrorists in the federal government are continuing their push to have a fully functioning martial law apparatus. The city of Denver was recently invaded by a large number of military helicopters without any sort of warning given to the general public. It was originally speculated that this training exercise had something to do with the upcoming Democratic National Convention, but a spokesman with Special Operations said that it wasn’t related and that the exercises would last all week. It is interesting that this spokesman said it had nothing to do with the upcoming DNC. If that’s the case, than what is the real purpose of this exercise?

dod warns residents away from urban combat training
from raw replay: A Dept. of Defense spokesperson has warned Denver residents to keep their distance from military helicopters conducting urban combat training in the city. Lt. Steve Ruh said, “we don’t want you guys to be impaled from flying debris from our helicopters.” Lt. Ruh would not tell the CBS affiliate in Denver why citizens were not warned in advance of the exercises. He did say that Denver residents had been vigilant in contacting authorities after the exercises began. “Denver has some amazing citizens. I am happy to see that Denver is very proactive - the citizens are - with reaching out, contacting 911 and contacting the news media saying, ‘Hey, look, something is out of the norm here.’” >At least one Denver resident complained that turbulence from the helicopters had strewn items around the yard and shattered a window. Michelle Simpson described the proximity of the exercises to her home as “creepy.” CBS News 4 has more more details here. This video is from CBS 4 Denver, broadcast June 18, 2008.