from cryptogon: I’ve avoided following the Blackjack/Jackblack developments too closely on here because I’m pretty sure that the point is to study the people who are paying attention to it. And yes, I’m up to speed on all the latest nonsense. There’s no need to send me any more story suggestions or emails about it, UNLESS you know who is behind it.

Next week, we have record U.S. Treasury debt offerings that might not go so well. There’s also Ardent Sentry 2009 underway now, and running into next week. And… Wait for it: The Summer/Winter solstice.

But then Boeing took a look. And now DHS is sniffing around.

Personally, I don’t think it’s viral marketing. I can’t imagine that there are more than a couple of thousand people on the planet even paying attention to this ridiculous stunt. I also seriously doubt that it has anything to do with any sort of pre-attack planning. I mean, come on you guys, snap out of it… My best guess is that it’s a sociology project and that the topics involved with it finally attracted the attention of DHS and others.

Who’s behind it? I have no idea, but I bet DHS is going to find out. 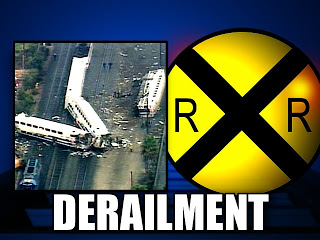 from chicago tribune: Several cars from a Canadian National Railway Co. train smoldered Saturday near Rockford as federal investigators continued to probe whether standing water from heavy rains was a factor in a Friday night derailment that left a 41-year-old woman dead and three others injured. Zoila Tellez of Rockford died trying to flee her car, which was stopped at a rural Cherry Valley railroad crossing when the train derailed. Three passengers got out and ran, but Tellez collapsed 20 feet behind her vehicle and died, Winnebago County Coroner Sue Fiduccia said Saturday. "When everything went to hell and debris started flying and everything, she got out of her car and started to run away from it and that's when she got caught in the fire," said Fiduccia, who planned a Sunday autopsy. A 17-year-old female passenger was in critical condition in the Stroger Hospital burn unit after being flown by helicopter Saturday, a hospital spokesman said. Another remained in a Rockford hospital. The train was on its route from Freeport to Chicago when 18 cars derailed about 9 p.m. Friday, CN spokesman Patrick Waldron said. National Transportation Safety Board officials said a probe could take up to a year. A team of 15 investigators, including representatives from the Federal Railroad Administration and CN will examine track structure and maintenance, integrity of the train cars, crossing signals and the hazardous materials associated with the crash, a spokesman said.

it isn't fair to put this story here, but another train derailment is disturbing...

update3: 6 dead, 70+ injured in subway collision in US capital
from dpa: Two subway trains collided Monday in the US capital, leaving at least six people dead and 70 injured, authorities said. The above-ground collision occurred about 5 pm (2100 GMT) just inside Washington, near the Maryland state line. One train had apparently stopped between stations before being struck from behind by a second train. 'The scene is as horrific as you can imagine,' Washington Mayor Adrian Fenty said. Local news footage showed one heavily damaged carriage pushed up on top of another. The force of the collision tore the floor out of the moving train's front car as it vaulted onto the stopped carriage. The driver of the moving train was among the dead, officials said. The driver's compartment at the front of the train was obliterated. Both trains were inbound from the suburbs into the city during the evening rush hour and apparently not filled to capacity. A similar collision of outbound trains packed with commuters at that hour could have produced a far higher casualty toll. Washington Fire Chief Dennis Rubin said that 70 people had been treated for injuries. Of those, 50 were 'walking wounded,' 14 people suffered serious injuries and six were in critical condition.