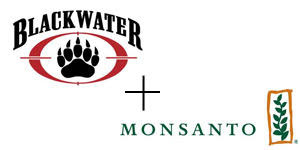 from grist: Oscar Wilde once described the traditional English gentleman's pastime of fox hunting as "the unspeakable in pursuit of the inedible." I thought of that great line when I caught news that Monsanto, probably the globe's most reviled agribusiness firm, had contracted the services of Blackwater, the globe's most notorious "private security" (i.e., paramilitary) firm.

The agribusiness giant was one of a group of transnationals - others include Chevron, the Walt Disney Company, Royal Caribbean Cruise Lines, Deutsche Bank, and Barclays - that hired a Blackwater shell company called "Total Intelligence Solutions" for overseas services.

In an email obtained by Scahill, a Blackwater operative who had talked to Monsato officials ahead of the hiring claimed that the security firm would "develop into acting as intel arm of Monsanto" -- including infiltrating activist groups working to oppose it. The operative wrote hopefully of Monsato's "generous protection budget."

A Monsanto official told Scahill that the relationship ended in early in 2010 and denied that there were ever plans to infiltrate activist groups. Instead, he said, Blackwater served Monsanto "by monitoring local media reports and other publicly available information." Scahill adds: "The subject matter ranged from information regarding terrorist incidents in Asia or kidnappings in Central America to scanning the content of activist blogs and websites."

I can confirm that Monsanto likes to keep a close eye on blogs and websites. Back in 2005, I got my break as a food-politics writer after a Monsanto lawyer slapped my blog, with its all of 30 readers, with a cease-and-desist letter.