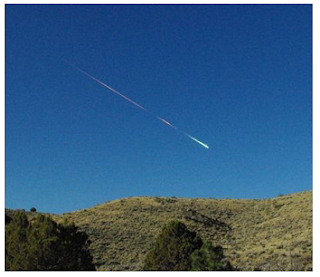 A bolide i.e., an exploding fireball, streaked from east to west over Nevada and North California, some time around 8 am on April 22, with loud booms heard in both states. The Lyrid meteor shower and space debris have been ruled out. The bolide determined to be caused by a huge meteor of some 70 metric tons that exploded with the energy equivalent to a 5 kiloton bomb. A recent Universe Today article reports meteor hunters have already recovered fragments. Peter Jenniskens, one successful meteor hunter, said fragments are called “…Carbonaceous Chondrites from the CM group of meteorites, “a rare type of primitive meteorite rich in organic compounds.”

A brief video reports on rare discoveries by the Meteorite Hunters – fragments considered a goldmine for researchers. Is it a fortuitous find – so quick and easy – or is it something else?