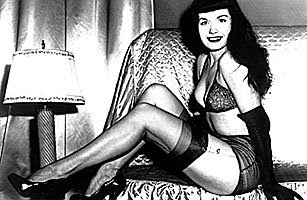 from reuters: Bettie Page, one of America's most photographed pin-up girls during the 1950s, died in Los Angeles on Thursday from pneumonia, her agent said. She was 85. Page was a ubiquitous sight during the 1950s, propelled to stardom when she posed for Playboy as Miss January 1955. Soon her image was gracing playing cards, record albums and bedroom posters across the country.

She stopped modeling in 1957, retreated from the public spotlight and turned to religion. She enjoyed a renaissance of sorts in the 1980s, as a new generation of fans became obsessed with her legacy. Her agent, Mark Roesler, said Page was admitted to a Los Angeles-area hospital four weeks ago. She never regained consciousness after suffering a heart attack earlier this month.

With her dark bangs, alluring blue-gray eyes and wide smile, Page cultivated an innocent girl-next-door persona. The one-time school teacher was nice, but clearly also naughty. Some of her photos featured spanking and bondage. "Bettie Page embodied the stereotypical wholesomeness of the Fifties and the hidden sexuality straining beneath the surface," authors Karen Essex and James L. Swanson wrote in their 1996 book "Bettie Page: The Life of a Pin-Up Legend."

Page professed to be mystified by all the attention, saying she never felt particularly attractive and had to wear a lot of makeup to cover up her large pores. After she found God, she was initially ashamed of having posed nude. "(B)ut now most of the money I've got is because I posed in the nude," she told Playboy last year. "So I'm not ashamed of it now, but I still don't understand it."