bono’s elevation of the elite 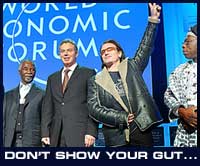 from propaganda matrix: Bono’s latest efforts to dodge taxes and invest in the very capitalist franchises he supposedly rallies against prove that he is one of the leading characters in a puppet show that, far from helping emaciated kids in Ethiopia, serves only to keep the third world in chains while herding Westerners into the same debtor slavery prison…

The plan is not to elevate the third world but to lower the living standards of Americans by guilt-tripping them into financial sacrifice in the name of humanitarian disasters created by the globalists themselves, in addition to a global tax at the fuel pump mandated by the imaginary specter of global warming.

Meanwhile, Bono shifts his assets to offshore tax havens to avoid paying the very taxes that he campaigns for – this is the height of hypocrisy and exposes the beast that the U2 singer fronts for.

He has also recently purchased a large minority stake in Forbes Media, which owns Forbes Magazine, a celebration of wealth, consumption and elitism.

No doubt Bono would also embrace the virtues of the ‘global warming’ orthodoxy elite who zoom from each scripted press conference in their air-conditioned luxury jets while preaching that Americans must take their SUV’s to the knacker’s yard.

Notable therefore it is that Bono himself once ordered his favorite hat to be flown first class via British Airways to Italy at a cost of $1700.