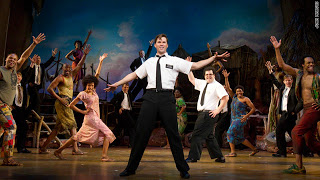 ‘book of mormon’ set to open on broadway

from cnn: A new musical set to open on Broadway Thursday night looks at religious faith and doubt with a healthy dose of imagination: the audience meets Jesus, Church of Latter-day Saints founder Joseph Smith, Satan, and an African warlord as well as Darth Vader, Yoda and two hobbits. The production, called The Book of Mormon, was written by South Park creators Mark Stone and Trey Parker, along with Robert Lopez, who wrote the Broadway hit Avenue Q.

The creators have used music, irreverent comedy, and obscenity to tackle controversial subjects before, but they say their approach is new to Broadway musicals. “Broadway, for so many years, was a very wholesome community,” Lopez told CNN. “As far as comedy, (Broadway) has not progressed as far as movies and TV (even though) there are no censors.”

Lopez met Stone and Parker after they saw Avenue Q, which followed young puppets and humans living in a fictional New York as they dealt with careers, relationships, sex and the challenges of managing expectations. When they asked him what he wanted to work on next, Parker told them he was interested in doing a musical about Mormonism.