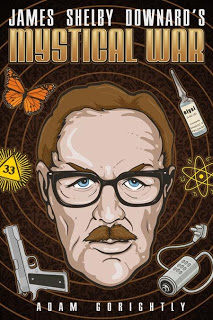 Adam Gorightly, esoteric researcher, interrupts your regular programming to take penetrating look at bizarro world of anti-mason fighter James Shelby Downard in 2008 book, "James Shelby Downard's Mystical War." In under a hundred pages, Gorightly mesmerizes with Downardian insights that date to  early 20th Century.  It's amazing to read, Downard subjected to mind control humiliation on Jekyll Island, SC in front of the likes of Alexander Graham Bell.  A reader puts down book, wondering if Downard was real or fiction, as Gorightly characterizes a "Little Rascal" protagonist from an early age outwitting dull Masonic goons?  In fact, rumors lurk Downard was the literary creation of Michael Hoffman, William Grimstad, and Adam Parfrey.   The author seems satisfied Downard wasn't a complete fiction, although admittedly, will never be completely satisfied.  The present writer falls into category that Downard kept copious notes of brilliant penetrating insights, but as a purported mind control victim himself, lacked the steady coherence to organize insights into readable articles and books?  In any event Downard proves curious enough, Idaho history professor Dr. Richard B Spence, reveals what he could verify about Downard's life in "Searching for James Shelby Downard." The vital statistics scrutinized gleaned from Downard's "The Carnivals of Life and Death: My Profane Youth: 1913-1935." Gorightly takes reader through tour of Downard's writing with chapter-by-chapter treatments of "The Carnivals of Life and Death," "Skullduggery," "Call to Chaos" and mother-of-all Illuminati conspiracy theories, President Kennedy's assassination as masonic sorcery, "King Kill 33." You can read more on King Kill 33 rite from a previous post here.

It's likely trident symbolism of Dealy Plaza located on 33rd parallel, a Downard observation, that sucked author in and results in book with comprehensive view of our anti-masonic warrior and subject.  The present writer fell prey to same fascination as Downard excels at symbolism and mystical toponomy.  Have you considered Oswald as "Oz" and Jack Ruby, an association with ruby slippers, symbols of "Wizard of Oz" movie reputed to be used for mind control programming?

Gorightly has written a very good book, underrated, a fascinating view down rabbit hole with strange and uncomfortable truths. You meet James Shelby Downard there, at its greatest depths, where he once wrote on his correspondence "Belligerent Rabbit Society" and lived with an elusive pet rabbit.  The longer you read and contemplate  - what seems at first clearly impossible - takes on an air of plausibility, then you begin to wonder if you've lost it?  Downard's Mystical War with Freemasonry reads like a horrible car accident - a terrible reality - but one you find unable to tear your eyes away from - mesmerizing horror!  Vyzygoth, who writes Forward, discusses subject with Gorightly in a 2006 interview. We now resume our regular programming!