#BookSmarts: “But What If We’re Wrong?” 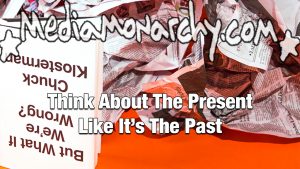 I’ve been reading Chuck Klosterman since the good ‘ol SPIN Magazine days. I’ve read almost all his books from ‘Sex Drugs n Cocoa Puffs’, to ‘Fargo Rock City’, his debut, which he autographed for me when I saw him at a reading here in PDX several years ago.

“Klosterman (I Wear the Black Hat) conducts a series of intriguing thought experiments in this delightful new book about how we conceive of the future. He begins with a conundrum virtually all writers contemplate at some point: why do some writers achieve literary immortality while others are totally forgotten? From there, he works through similar questions with respect to rock music and then shifts to wondering which of our established scientific principles might be replaced in the centuries to come. This is pop philosophy, but Klosterman takes it seriously enough to bring in heavyweight experts such as Neil deGrasse Tyson and George Saunders. Klosterman also considers the long-term viability of the NFL and team sports in general. He asks, supposing that the ancient Egyptians had TV, which of their TV shows would interest us most—the Egyptian Breaking Bad? He argues that we’d want the most realistic portrait of society possible, and that level of realism is only achieved unintentionally. As usual, Klosterman’s trademark humor and unique curiosity propel the reader through the book. He remains one of the most insightful critics of pop culture writing today and this is his most thought-provoking and memorable book yet.”

Monarchy Marketplace: Buy “But What If We’re Wrong?” on Amazon and Support Our Work
http://amzn.to/2lp7vTG