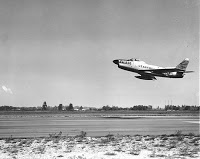 from afp: Britain’s Ministry of Defence on Monday made public its secret files on UFO sightings, with the dossier including a range of reports from a close encounter with a UFO over Kent and a letter from a woman claiming to be an alien warrior. The 19 different incidents were recorded between 1986 and 1992, and published on the National Archives website.

from danger room: At the height of the Cold War - and hysteria about alien invasions - two U.S. fighter planes were "scrambled and ordered to shoot down a UFO over the English countryside," Reuters reports. The incident is one of thousands of UFO-related files, declassified and released by the British government today. In one document, F-86 pilot Milton Torres describes his encounter with a huge, erratically-moving object in May, 1957. "The order came to fire a full salvo of rockets at the UFO," he writes. "To be quite candid I almost shit my pants!" (Click here for the full account, starting on page 259.)