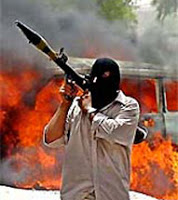 from raw story: CNN on Thursday showed graphic footage of a pro-US Sunni militiaman beating and threatening to kill a suspected al-Qaeda member and of another al-Qaeda member being executed by a militia group.

According to CNN, American commanders say they do not condone the violence and summary executions, but they appear to accept them as an "ugly but effective" aspect of the war. Although "the Shia-dominated government in Baghdad is not happy, wary of US support for armed Sunni groups," this is also unlikely to carry much weight with US commanders.

In a followup pice on Friday, Baghdad correspondent Michael Ware commented on the "unseemly" nature of the strategy, saying, "Does it have some ugly edges? Yeah. And American commanders knew this when they commissioned this project. ... They're putting the fear into al Qaeda, and that's why we're seeing such an enormous change in the attacks in Anbar Province."

"The Shia government is dead against it," Ware continued. "The government sees that these Sunni militias are being used as a counterbalance to their own Shia militias, which of course are backed by Iran." However, Ware sees that as an additional advantage to the strategy in the eyes of the US military. "These people are not fools," he said of the US commanders. "They know what's going on."