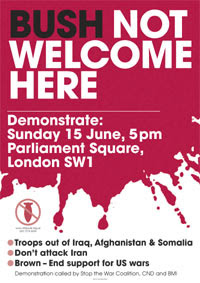 from guardian: George Bush arrived in the UK today for his last presidential visit to the country before leaving the White House next January. Airforce One touched down at Heathrow just before 2pm. On the final leg of his European tour Bush will take tea with the Queen, dine with Gordon Brown and have breakfast with Tony Blair.

His arrival has prompted planned demonstrations and a heavy security operation. The Stop the War coalition are planning protests at Windsor and Parliament Square. They are also expected to defy a police ban and march past Downing Street. The Metropolitan Police said it has mounted a "significant" operation involving 1,000 officers.

bush dines with rupert murdoch as protests go on

from thinkprogress: Yesterday, President Bush “arrived at Downing Street for a private dinner hosted by Gordon Brown and attended by Rupert Murdoch, a clutch of ministers and a mini-faculty of historians.” Thousands of Britons turned out to protest the President, chanting, “George Bush terrorist” and “Arrest George Bush.” 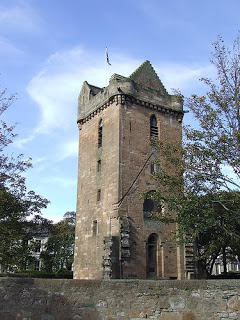 from reuters: Pope Benedict will unusually host talks with U.S. President George W. Bush in a restored medieval tower on Friday, to repay him for a warm reception at the White House, the Vatican said. The pope usually receives heads of state in his private study in the Apostolic Palace, overlooking St Peter's Square. But Vatican spokesman Federico Lombardi said the change was to repay Bush for "the cordiality of the meeting at the White House" when the pope visited the United States in April. St. John's Tower is a round structure on a hilltop inside the Vatican gardens that is sometimes used as a residence for important guests... The late Pope John XXIII, who reigned from 1958 to 1963, restored the tower as a place where he could work in peace. 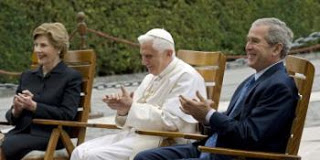 from about: On Friday, June 13, 2008, as George W. Bush met with Pope Benedict XVI, the London Telegraph reported rumors that the President is considering conversion to Catholicism. On one level, there seems little of substance in the rumor, which may have started simply because the Holy Father greeted the President in the Vatican gardens rather than in his private study, where the two men have met in the past and where Pope Benedict has received all other world leaders. A Vatican spokesman, however, said that the venue was simply chosen to parallel the welcoming ceremony that the White House held for Pope Benedict during his visit to the United States in April.

bush protesters clash with police in uk
from raw replay: Protests were staged as George Bush visited Downing Street and Windsor on day one of his trip to the UK. The US president is in London with his wife Laura as part of his ‘farewell’ tour of Europe. This video is from BBC, broadcast June 16, 2008.

update: police used 'agents provocateurs' at uk bush protests
from steve watson: Anti-war MP George Galloway has accused London Metropolitan Police of engaging in "a deliberate conspiracy to bring about scenes of violent disorder" during President George W. Bush’s visit to the UK last week. Galloway has written a letter to the Home Secretary in which he names a senior police officer thought to have been operating as an undercover "agent provocateur".

The Respect Party MP details incitements that the officer made towards police and how the man encouraged other protesters to charge baton-wielding officers and hurl projectiles at them. Galloway cites an article from last Weekend’s Mail On Sunday in which author Yasmin Whittaker-Khan detailed how she bumped into a known senior police officer, dressed like a press photographer with a large expensive camera, who shouted “Pigs out!” and enticed others to the front of the police-protestor clashes.