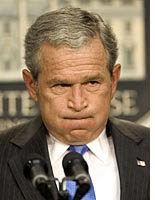 from guardian: George Bush's public approval ratings hit a new low yesterday as Democratic opposition to his planned US troop increase for Iraq rapidly gained momentum. Even before Mr Bush formally announces a fresh Iraq strategy tonight, Democrats in the new Congress discussed a range of options that include withholding funding for what they call an escalation of the war.

A poll in USA Today showed that approval for Mr Bush's handling of the war has dropped to 26%, a record low. About 61% opposed Mr Bush's proposed 20,000 increase in the number of troops...

The USA Today poll, which interviewed 1,004 people, found that almost half said the US could not achieve its goals in Iraq regardless of how many troops it sent. Eight in 10 said the war had gone worse than the Bush administration had anticipated and 72% said Mr Bush did not have a clear plan for Iraq. Worryingly for the Democrats, however, the poll showed that 66% had no confidence that the party had a clear plan for Iraq either.

Powerful committees in Congress will have their first chance tomorrow to question Condoleezza Rice, the secretary of state, and Robert Gates, Donald Rumsfeld's replacement as defence secretary, about the new plan.