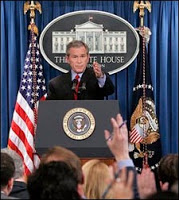 from jason rhyne: Fourteen White House reporters were given a rare hour of access to President Bush on Monday, but the issues they discussed won't be making any headlines - the session was all off-the-record.

The informal meeting, as reported by the Los Angeles Times, took place as part of a new White House plan to reach out to the press without having to rely on "full-blown news conferences."

"He did the same in September, speaking aboard Air Force One with reporters while traveling to Sydney, Australia, from Iraq's Anbar Province," wrote the paper's James Gerstenzang.

An additional nine reporters were invited to the Oval Office on Thursday to "preview" President Bush's speech to the Heritage Foundation, in which he defended attorney general pick, Michael Mukasey, and characterized "some in Washington" as listening more to MoveOn.org and the anti-war group Code Pink than to "warnings of terrorists like Osama Bin Laden."

Although that particular session was on-the-record, it was "off-camera."