california throws away enough food to fill 35 stadiums per year

“keep this story in mind next time you hear that nonsense from people like bill gates insisting we need gm crops to feed a hungry world.” 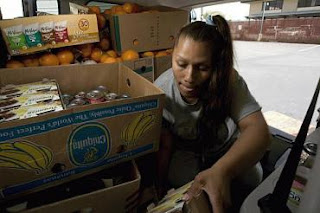 from sfgate: Farmers, restaurants and supermarkets throw away millions of tons of edible food each year at a time when a growing number of Californians struggle to put food on the table.

More than 6 million tons of food products are dumped annually, enough to fill the Staples Center in Los Angeles 35 times over, state studies have found. Food is the largest single source of waste in California, making up 15.5 percent of the state's waste stream, according to the California Integrated Waste Management Board.

An examination by California Watch and the Annenberg School for Communication and Journalism at the University of Southern California found shortcomings along California's food distribution chain that allow vast amounts of food to go to waste in landfills, despite incentives that encourage food donations.

-- Millions of tons of fruit and vegetables rot in fields and orchards or are plowed over each year. Some of these edible crops are left behind because they are misshapen or discolored. Gleaning programs rescue only a small portion of the field waste.

-- Major retail grocery chains are more likely to throw away fruits, vegetables and even entire hams and roasts than donate to distribution centers. While federal and state laws protect grocers from liability, many stores were concerned that donated food could sicken recipients even if it had not reached its expiration date. While some major chains donate food, others do not.

-- Restaurants dump tens of thousands of tons of edible food every year. The vast majority of the state's 90,000 restaurants do not participate in food-donation programs.