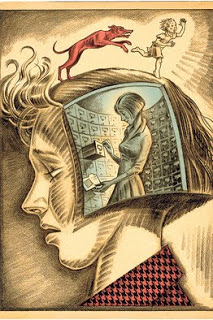 Can You Alter Your Memory? 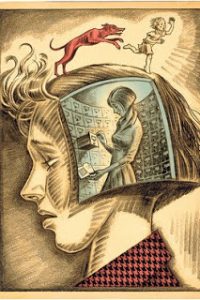 from wsj: Is it possible to permanently change your memories? A group of scientists thinks so. And their new techniques for altering memories are raising possibilities of one day treating people who suffer from phobias, post-traumatic stress disorder and other anxiety-related conditions.

Some researchers are working with combat veterans, car-accident survivors and rape victims to replace their memories with less fear-filled ones using a familiar hypertension drug. Other scientists are studying whether behavioral therapy can one day be used to modify memories of people who react with fear to common anxiety-producing events. A person bitten by a dog as a child, for instance, might be able to overcome a canine phobia if the old memory can be replaced with a less scary one.

The goal of the research isn't to erase memory outright, as depicted in popular movies over the years. That would raise ethical issues and questions of what would happen to associated memories, scientists say. Instead, "reducing or eliminating the fear accompanying the memory...that would be the ideal scenario," says Roger Pitman, a psychiatry professor at Harvard Medical School who has done extensive work in this area.
The latest research is based on a radical rethinking of how memories are stored in the brain. Scientists used to believe memories are like snapshots on which the details are fixed once they are recorded. Now, many experts accept the view that memories are stored like individual files on a shelf; each time they are pulled down for viewing, they can be altered before being put back into storage. Altering a memory during the time it is off the shelf can create an updated memory that can be saved in place of the old one, scientists believe.

Sometimes a traumatic incident can trigger an enduring response of fear whenever the incident is recalled, even indirectly. A car backfiring, for instance, can set off an emotional response in a combat veteran if the loud noise becomes associated in his mind with a wartime experience.

A common therapy currently for trauma and phobias is called exposure treatment. It involves repetitive exposure in a nonthreatening way to help patients confront their fears and gradually weaken the fear response, a process known as extinction. But with extinction, the fearful memories don't disappear or get altered, and relapse is common, says Edna Foa, an expert on post-traumatic stress disorder at the University of Pennsylvania School of Medicine. If extinction could be enhanced, that could mean more efficient treatment with less relapse, she says.

Researchers are hoping new techniques will weaken the fear response for a longer period, or perhaps permanently. The trick, they say, is to administer the treatment after the original memory has been retrieved from storage so the updated memory will be saved. One way of doing this is to have the subject write a detailed account of the original incident and reread it at the start of each treatment session.

In a recent study, Harvard's Dr. Pitman and Alain Brunet, a psychiatry professor at McGill University, treated a Montreal man who had developed symptoms of post-traumatic stress disorder after being hit on the head with the butt of a gun and fearing for his life during a bank holdup. The man gave up his long-time hobby of bird watching and broke up with his romantic partner. And he became house bound, because he felt unsafe whenever he went outside, Dr. Brunet says.

The man received six treatment sessions, Dr. Brunet says. At each session, he would revisit the original memory after being given the drug propranolol, a hypertension medication that reduces common symptoms of fear, which include a speeded-up heart rate and excessive sweating. By the fifth treatment, Dr. Brunet says, the man said he felt remote when reading the script he had written. Now, two years after the treatment, the man has resumed his normal activities and says that although he remembers the events at the bank, he doesn't feel scared anymore, Dr. Brunet says.

Dr. Brunet is currently enrolling patients for a new study in which participants with traumatic memories will randomly be assigned to receive propranolol or a placebo. Dr. Brunet previously performed two small studies with Dr. Pitman, one published in the Journal of Psychiatric Research in 2008 and the other awaiting publication, that showed PTSD symptoms were reduced in subjects who received propranolol after evoking memories of their past traumatic events. "They felt less symptomatic, less emotional about the memory," Dr. Brunet says.

Another research effort also aims to alter traumatic memories, but with the use of behavioral therapy instead of drugs. Elizabeth Phelps, a psychology professor at New York University, worked with colleagues at the University of Texas at Austin, to use a laboratory experiment to induce fear in 65 study participants. The results were published in the journal Nature in January.

Each person was hooked up to a machine that would administer a mild but unpleasant electrical shock at certain times. Participants sat in front of computer screens where they looked at shapes of various colors. Whenever the blue square popped up, the machine shocked the participant. Soon the participants learned to "fear" that image; when they saw it on the screen, they would sweat more, as measured by a common gauge.

The next day, all participants underwent exposure treatment in the lab, to unlearn their fear. This time, when they looked at blue squares on their computers, they received no shock. For one group of participants, however, the researchers created a window of opportunity to administer the therapy after retrieving the original memory. Ten minutes before the fear-extinction session, the group was "reminded" of the previous day's experience by being shocked once more, which activated the fear memory from storage and made it available for possible alteration. The rest of the participants received the fear-extinction training outside of the time period in which the memory is thought to be modifiable.

On the third day of the experiment, participants were tested to see how they responded to the fearful memory. Only the group that had received the retraining during the memory-retrieval period didn't relapse. These participants showed no physiological indication that they remembered that seeing the blue square meant they would be shocked. This memory modification was still intact up to one year later.

Dr. Phelps says more work needs to be done to know if the process can work in real-life situations with complex memories. "Going from blue squares to PTSD is a big leap," she says. She also says the technique could have uses beyond treating traumatic memories, perhaps to treat obsessive-compulsive disorder.

Or, the treatment could be used to affect the mind's ability to enhance happy memories, which can make them seem even more pleasurable than the original event. Dr. Brunet says that might be useful in helping some people quit smoking. Smokers often feel happiness when thinking back to good times involving smoking, which makes them want to smoke again, he says. If the good feelings could be dampened, smokers may feel a reduced urge to light up, he says.