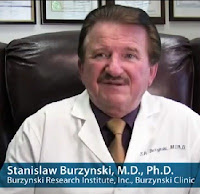 After a grueling 15-year long battle, the Texas Medical Board has officially ended its crusade to revoke Dr. Stanislaw Burzynski's medical license in an effort to end his use of Antineoplastons, as well as his combination gene-targeted therapy for cancer.

The Texas Medical Board’s case against him was dismissed on November 19, 2012, just in time for Thanksgiving. According to Dr. Burzynski’s attorney, Richard A. Jaffe, Esq:

“Early on, two medical board informal settlement panels found that the use of these combination drugs on the advanced cancer patients involved was within the standard of care.

However, the Texas Medical Board refused to drop the case and instead filed a formal complaint against Dr. Burzynski alleging the same standard of care violations previously rejected by the board settlement panels.

After two years of intense litigation, the case was set for trial in April 2012. However, a week before trial, the administrative law judges dismissed most of the charges against Dr. Burzynski which forced the Board to seek to adjourn the case to do some reevaluation.

After the judges denied the Board’s attempt to reverse the previous partial dismissal of the case, the Board did more reevaluation and moved to dismiss the entire case.”

In 2010, Texas Medical Board staff charged Dr. Burzynski with prescribing and administering drugs not yet approved by the FDA for the treatment of cancer in two patients. They also claimed he had overcharged for the drugs, and, in one case, that he had failed to inform the patient that the treatment was having an insignificant impact on her cancer, delaying her ability to make an informed decision about whether to continue her treatment.

On both counts, the Board determined that the treatments did not violate the standard of care, and that patients had been appropriately billed. They did however agree he failed to inform the patient that the treatment was ineffective, and in the other case, they determined he had failed to maintain adequate medical records.