CDC Claims Over 1,100 #WestNileVirus Cases In US 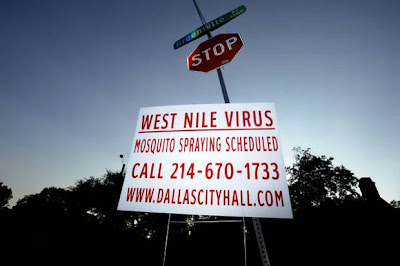 from cbsnews.com: U.S. health officials say there's been an alarming increase in the number of West Nile cases. So far, there have been more than 1,100 cases of the sometimes deadly virus reported through the middle of August. That's three times as many as usually seen at this point in the year. Most West Nile infections are reported in August and September. About half the cases are in Texas. More West Nile virus cases, deaths add to growing concern around U.S. The Centers for Disease Control and Prevention reported the new numbers Wednesday. They say the mild winter, early spring and very hot summer have fostered mosquito breeding. Mosquitoes pick up the virus from birds and then spread it to people. West Nile virus was first reported in the United States in 1999.