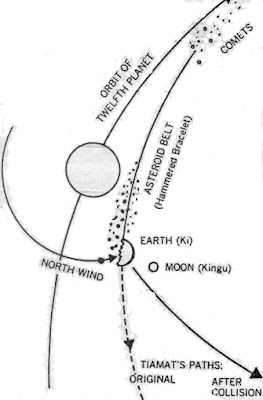 The Babylonian Creation Myth or Enuma Elish was recovered in 1849 among the ruins of Ashurbanipal's library in Nineveh (modern day Mosul, Iraq). The epic recorded on clay tablets in cuneiform script, 6,000 years ago, includes a description of the formation of our Solar System. Sasha Lessin, a student of Zecharia Sitchin, covers the creation epic in the following essay, "The Celestial Battle: Nibiru Meets Solaris and Tiamat." Lessin writes, "...four billion years ago...Neptune’s gravity pulled Nibiru, a planet adrift after its sun collapsed, from far outer space into the Solaris system. Nibiru invaded the System clockwise....On one of Nibiru’s orbital perigees around Solaris (four billion years ago), one of Nibiru's moons slammed into Tiamat and gouged out huge chunks. These chunks of Tiamat careened into space. We call the gouge in Tiamat where Nibiru’s moon hit "the Pacific Basin," the chunks of Tiamat 'asteroids and comets,' and the remainder of Tiamat 'Earth'." It is the moon called "North Wind" (pictured) that collided with Tiamat. Nibiru, the planet of the crossing, reaches its perigee--or closest point to the Sun--near the asteroid belt every 3,450-3,600 years, according to Sitchin's research. Sitchin believed ancient astronauts visit Earth during this time of crossing and created the human race.