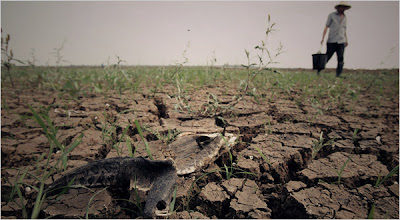 from nytimes: A severe drought along the Yangtze River region in central China has rendered nearly 1,400 reservoirs in Hubei Province temporarily unusable, devastated farm fields and made drinking water scarce, according to a report on Monday by Xinhua, the state news agency. The drought, which has lasted for five months, has brought water levels in the middle part of the Yangtze to a near-record low. For the second time since the Three Gorges Dam, the world’s largest hydroelectric project, began operating, officials have had to make emergency water discharges from it to help ease the drought. As of Sunday, 4 medium-size reservoirs and 1,388 small reservoirs in Hubei had dropped below the allowable discharge levels for irrigation, the official Xinhua News Agency reported, citing the director of the reservoir management office for the Hubei Provincial Water Resources Department. One-fourth of all small reservoirs had what officials called “dead water” remaining, which could be pumped for use only in an emergency.