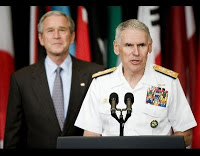 from danger room: Admiral William Fallon, commander of US Central Command, has turned in his resignation, and Defense Secretary Gates has accepted it. The press, previously hypnotized by the Spitzer scandal, is furiously spinning to find out more. But early speculation will almost certainly center around this interview with Esquire's Tom Barnett, in which the Admiral was portrayed as bucking the White House's push for a showdown with Iran... "Gates said in a press conference just now that no one should think the move reflects any substantive change in policy. That sure won't be how Tehran sees it," Spencer Ackerman says.

the ant man exits: war crime accomplice
canned for insufficient groveling
from chris floyd: As we noted here the other day, the magazine's view of Fallon as some kind of secret peacenik was laughable: after all, Fallon, as head of U.S. Central Command, has been directing Bush's murderous and illegal Terror War actions in Iraq, Afghanistan and Somalia for the past year. Multitudes of innocent people have died in the imperial satrapy under his command. And while it's true that he voiced some disagreement over the timing and tactics of the White House's bellicose approach to Iran, he also made his true opinion of the possibility of an assault on Iran abundantly clear, telling Esquire: "These guys are ants. When the time comes, you crush them."

update: fallon makes unannounced iraq visit
from press tv: Former commander of US forces in the Mideast, Adm. William Fallon, has made a surprise visit to Baghdad shortly after stepping down. "Admiral William Fallon is currently in Baghdad," the US military spokesman, Lieutenant Michael Street, said on Wednesday.

flashback: bush may fire fallon for someone more ‘pliable’