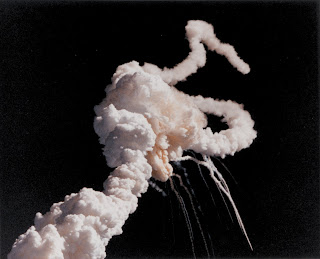 In observance of the 25th anniversary of the Shuttle Challenger disaster, the words of NASA public relations officer Steve Nesbitt just over a minute after launch, seem etched on people's minds, "obviously, a major malfunction". CNN Live coverage from that fateful day January 28, 1986, can be viewed here. Richard C Cook, author of Challenger Revealed, recounts the O-Ring issue and Morton Thiokol's reservations in a, "Lew Rockwell article," which recaps the mainstream media message on the disaster. Cook issued a memo six months prior with his safety concerns, when contractors related to him shortly after his arrival at NASA, they held their breath with every launch because of deficiencies in the design of the O-Rings and especially at cold temperatures. There is another message implicit in the event, however.

It's the hidden meaning of the names of the space shuttles. "A Colombian Enterprise to Endeavor for the Discovery of Atlantis... and all Challengers shall be destroyed," taken from the late William Cooper's writings, which can be read here. Cooper believed it's the symbolic language of the Illuminati.

The late David J Meyer, a minister who warned about dangers of the occult and secret societies, is prescient in this January 1995 Last Trumpet Newsletter:

We know that the name Columbia is taken from the Washington D.C. or District of Columbia, where the Illuminati is actively utilizing the the United States Government for its own purposes. Enterprise is the name given to the plan to bring forth the new world government. Endeavor is the labor required by the Illuminists to bring forth the New World Order. Discovery is the discovery of the New Empire that is to be brought forth from the ashes of the old. Atlantis is the name given to the New Empire. The legend of the lost continent of Atlantis reveals that it was a Socialist Superstate that controlled ancient Europe. It is the Illuminists who are trying to bring forth a New Atlantis, which is to rise again.

If we take these names of the space shuttles in order, we come up with an interesting sentence as follows: Columbia in a great Enterprise will Endeavor to Discover Atlantis. It is interesting that the shuttle named "Challenger" was destroyed! The conspirators love to speak and communicate in secret or cryptic language, but God reveals all of their secrets."

Are the shuttle's names used in 'twilite' (or twilight) language to influence us? In the video, "Unholy Alliance," a strong case builds on the interpretation provided by Cooper and Meyer. "The ENTERPRISE of the United States (COLUMBIA), shall be destroyed after completing its mission. CHALLENGERs shall be destroyed before completing their mission and replaced by our last British led ENDEAVOUR, for the DISCOVERY of ATLANTIS." It certainly seems possible, "..apparent meaning of a word or phrase that changes once one learns its meaning,” the definition provided in the video of twilite language is at work. Are we on the last leg of a course directly to a a socialist superstate--a new Atlantis?