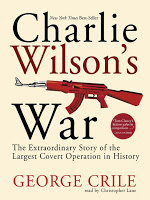 from chalmers johnson: When imperialist activities produce unmentionable outcomes, such as those well known to anyone paying attention to Afghanistan since about 1990, then ideological thinking kicks in. The horror story is suppressed, or reinterpreted as something benign or ridiculous (a "comedy"), or simply curtailed before the denouement becomes obvious. Thus, for example, Melissa Roddy, a Los Angeles film-maker with inside information from the Charlie Wilson production team, notes that the film's happy ending came about because Tom Hanks, a co-producer as well as the leading actor, "just can't deal with this 9/11 thing."

reagan's bargain
from consortium news: What’s left out of a movie about history often interests only a few experts in the field. However, the recent release of one that chronicles the successful sub rosa American effort to bleed the Soviet Army in Afghanistan in the 1980s may prove to be an exception.

more on 'charlie wilson’s war'
from no quarter: I have received some back channel emails from several friends–retired military and intelligence officers – who knew Charlie Wilson or worked on the Afghan Task Force in some form or fashion. Folks have different views and thoughts...

from mark crispin miller: Here's a sharp piece on Charlie Wilson's War as a piece of propaganda (quite different from George Crile's book, on which the film is based). Melissa Roddy notes that the film whitewashes US involvement with the Mujaheddin in Afghanistan, leaving out the inconvenient fact that US aid flowed freely to Gulbaddin Hekmatyar, a warlord who redistributed that money to, and otherwise assisted, Osama bin Laden. In other words, Charlie Wilson and the CIA helped make 9/11 possible - a truth apparently too painful for Tom Hanks.