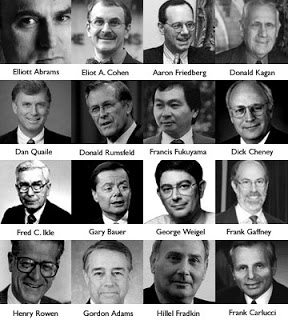 ...both wings of this phony bird are ratcheting up the rhetoric, but let's not get too distracted by the false left/right paradigm...

hersh: cheney has moles in obama govt
from raw replay: Investigative report Sy Hersh talks about his interview with Dick Cheney in which the former vice president continued to make anti-Obama comments.

from raw replay: The Neocons are back. The same Republicans who sold the country on the war in Iraq have formed a new group called the Foreign Policy Initiative, and declaring their last group as “mission accomplished.” Rachel Maddow is joined by thinkprogress.org’s Matt Duss. This video is from MSNBC’s The Rachel Maddow Show, broadcast Mar. 31, 2009.

john yoo arrested? wishful april foolin'
from infowars: A number of websites are carrying a story claiming that John Yoo, former Deputy Assistant Attorney General of the United States, was arrested in Milan, Italy, and is being held “for possible extradition to Spain, where he and five other retired officials who served under former President George W. Bush are expected to be indicted by a Spanish court for violations of the Geneva Conventions, the Convention Against Torture, and the Rome Statute of the International Criminal Court.”

bilderbergers to meet in greece on may14

spanish court weighs inquiry on torture for 6 bush-era officials
from nytimes: A Spanish court has taken the first steps toward opening a criminal investigation into allegations that six former high-level Bush administration officials violated international law by providing the legal framework to justify the torture of prisoners at Guantánamo Bay, Cuba, an official close to the case said. The case, against former Attorney General Alberto R. Gonzales and others, was sent to the prosecutor’s office for review by Baltasar Garzón, the crusading investigative judge who ordered the arrest of the former Chilean dictator Augusto Pinochet. The official said that it was “highly probable” that the case would go forward and that it could lead to arrest warrants.

update: surprise! leahy suggests 'truth commission' may not happen
from thinkprogress: In a meeting on Monday with Vermont citizens, Sen. Pat Leahy (D-VT) admitted that the truth commission he has advocated to examine Bush administration crimes like torture most likely won’t happen. Reporter Charlotte Dennett writes that Leahy said political opposition was too strong to overcome.