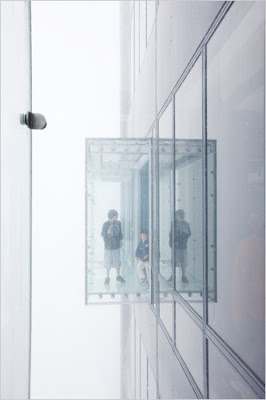 chicago’s willis tower: on ‘the ledge’ with echoes of the world trade center

There's growing chatter in the alternative media about the question: "Will There Be A New False Flag Attack On Chicago's Sears Tower?" In the past, we have covered the Tower's connections to Silverstein, Emanuel & the Private Intelligence Complex. But now there may be a new piece to add to the puzzle.

While looking through the print edition of yesterday's New York Times, an article on C1 caught my attention: "Suspended in Space, 103 Stories Over Chicago". It's a travel piece about the renovation of the Skydeck at Sears/Willis Tower and how 'The Ledge' has become a tourist attraction. This should raise a red (false) flag with you if - that is, if you have a degree in 9/11 folklore.

In the months leading up to 9/11, there was an event known as 'The B Thing' which allegedly involved building an observation deck on the 91st floor of World Trade Center Tower #1. This labyrinthine story is covered in great detail by Jonathan Elinoff's article: "Art Students in WTC Connected to Israeli Intelligence Service". Is this another case of predictive programming, that "subtle form of psychological conditioning provided by the media to acquaint the public with planned societal changes"? Or are we just chasing phantoms?

Suffice it to say: the eerie similarities, meta or otherwise, between the Willis & World Trade Center Towers keep growing as we approach the 10th anniversary of 9/11. And since this story seems to have gone unnoticed in the alternative media, we were excited to break it for you on the June 1st episode of 'The Bob Tuskin Show'.

video update: is the willis tower set up for false flag terror?