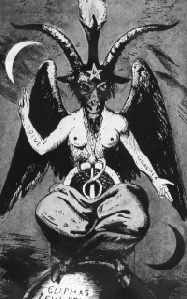 the chimera androgyne: the esoteric mystique of baphomet & abraxas

This particular blog shed a significant light upon the more esoteric study of the figure known as Baphomet. The study of Baphomet, being a subject of particular interest to this writer, takes many twists and turns. It is easy to see how this particular character gets a reputation for association with "devil worship" or "luciferian agendas". This particular blog entry contains a great swath of information regarding the "demon" in question.

from the aeon eye: In ancient and modern esoteric literature and occultism, Baphomet possesses a great importance among occult practitioners. From its inception from Templar idol lore to the English Magi of Eliphas Levi and Aleister Crowley’s revision and integration into their religious philosophies (such as Crowley’s Thelema), Baphomet has become a virtual mascot for the occult arts.

The origins of the name vary. One theory is that Baphomet is a variation of “Mahomet” (due to the Knights Templar campaign in the Middle East and inclusion of some Islamic religious ideas and rumors of even a fifth-column type of support for the Muslims), a medieval French corruption of the Prophet Muhammad, the warrior-king and founder of Islam. It does seem rather odd that a “whack-ass” attempt for a Western tongue to get around a Semitic language would become associated with a prime symbol of the occult.

The Arabic abufihamet comes out as bufihimat, which is translated as “Father of Wisdom” or “understanding.” Therefore, we can’t expect Baphomet to mean exactly what it says. If only one could consult the “Father of Understanding” to really get it. There hardly is anymore reason to suppose that there is a more complex understanding of Baphomet. Yet, this doesn’t stop occultist-psuedo-historians from doing so.