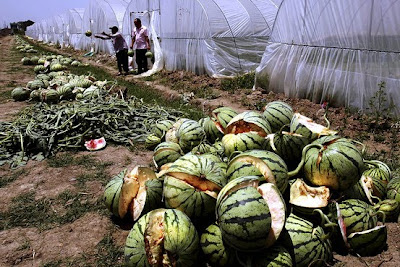 from wsj.com: China’s food safety problems are exploding–literally. In the country’s eastern Jiangsu province, a boom of watermelon explosions is turning otherwise peaceful farmlands into nature’s perilous mine fields, according to a report from China’s Central Television (in Chinese). Watermelon bombs have long-been popular with certain crowds in the U.S., including beach bums and Boy Scouts, who find the bursting fruit to be entertaining. But their presence in the Chinese market is causing quite the scare. The reason: China’s melons are exploding unintentionally, because of a chemical Chinese farmers have been using to promote faster growth in their fruit. According to a CCTV video report, melons treated with the chemical begin to split near the top and within minutes burst open to reveal a jaundiced yellowish-pink flesh. In one Jiangsu town, a watermelon exploded as an elderly woman was cutting it open. By spraying it on their crops, the broadcaster said, the farmers hoped it would double their yield and help them earn more money. Instead, it has done just the opposite. Few fruit markets are willing to buy the melons for fear that they will explode in transport. If eaten, the fruit may irritate human digestive system, the CCTV report said, citing a gastroenterologist at Shanghai’s Renji Hospital.