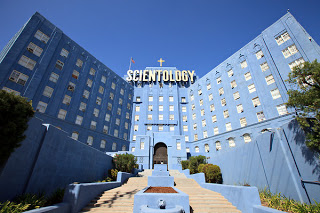 from Reuters: Defectors
from the Church of Scientology's elite ranks cannot use a
human-trafficking law to sue the church for alleged forced labor, a
federal appeals court ruled on Tuesday in a test case on the issue. The court rejected two former
ministers' claims that the Church of Scientology committed
human-trafficking violations by forcing them to work 100-hour weeks for
low pay under the threat of discipline. The
Church of Scientology was founded by science fiction writer L. Ron
Hubbard, and it describes its practices as a religion. The organization
has attracted followers including Tom Cruise, whose recent divorce from
Katie Holmes brought the religion into the spotlight, with media reports
saying Scientology was central to the breakup.