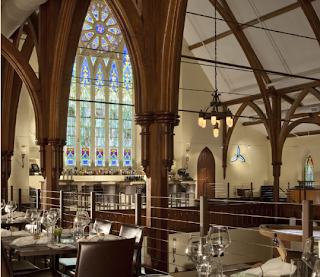 Church-Turned-Restaurant Leaves Diners In a State of ‘Grace’ 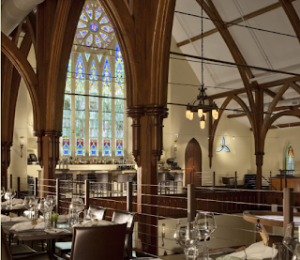 from faithworld: A passerby seeing the imposing church building with its massive, red doors bearing the word “Grace” and a mysterious triangular logo could be forgiven for thinking they had stumbled upon some kind of new-age congregation. In a way that’s true, for Grace – the restaurant, housed in a former United Methodist church in downtown Portland, Maine – is now a temple of high-end dining. The two-year-old venture is, visually at least, the crown jewel of the vibrant dining scene in Maine’s largest city. Stepping into Grace, patrons are met by soaring ceilings, 27 original stained-glass windows, and painstakingly restored woodwork inside a landmark building. The brick-and-brownstone church was last used for services in 2006, but abandoned to pigeons and vagrants because of a waning congregation and the high cost of upkeep for the 1856 Gothic Revival structure. Entrepreneur Anne Verrill and her then husband Peter bought the property in 2007 for $675,000, saving the church from likely demolition, and set about a top-to-toe, $2 million renovation.