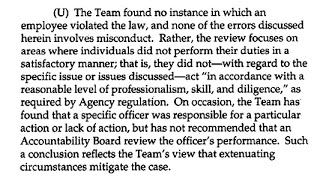 from new york times: Gen. Michael V. Hayden, the C.I.A. director, just released a public summary of the agency’s internal post-mortem on its performance before the Sept. 11 attacks.

In a news release paired with the document, the C.I.A. chief explained that he preferred to keep the document secret, urging “that we keep our focus on the present and the future.” But Congress ordered him last month to release the document as part of the approval of several 9/11 commission recommendations.

The inspector general’s report is titled “CIA Accountability With Respect to the 9/11 Attacks.” This paragraph, on the second page, appears to be the bottom line — no officers broke the law or faced formal review, but some work was rated as below “satisfactory”:

The full report, which can be downloaded from the agency’s web site here

, details the less-than-satisfactory moments. The full story from The Times is here.