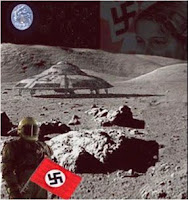 Ground Zero Live’s Clyde Lewis returns to KXL reinvigorated with fresh material from last weekend’s Conspiracy Con. In a new article, “Nazi Lunatic Outposts,” Lewis asks, “what if…there is more up there in space?” A brief list of lunar anomalies include the blue gem of Aristarchus crater and 1966 Lunar Orbiter 2 photograph of six or seven towers in Mare Tranquilis that seem outside the public’s awareness? The writer suspending reader disbelief-to some degree-journeys further down path to test reader acceptance: “In Nazi Astronaut lore it is reported that the first landing on the moon by the Germans was at Mare Imbrium on August 23, 1942 at 11:26 MEZ, using a Miethe rocket”. While an unsubstantiated claim, Lewis points out correctly the space program is virtually invisible to the public! We may be more in the dark than ever imagined! Psychic members of the Vril Society may have communicated with aliens and given plans for a space ship? The announcement of the last Shuttle mission and “an end of manned missions” seems a motivation for Lewis to revisit concept of space exploration. Lewis concludes with killing the civilian program it opens a “can of worms” as any black space program loses its cover. There are whistleblowers, according to Lewis, “…ready to blow the lid off the secret space program and possibly photos that point to possible evidence of the Nazi Lunatic Outposts.”