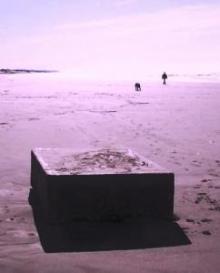 Strange metal boxes have turned up recently on Oregon beaches, following a flurry of UFO sightings. Clyde Lewis, Ground Zero Live Host, teams up with NW Ghost Recon set out, today, to Bray's Point and Stonefield beaches for a look. A report from Bray's Point, OR reveals, "They can’t be moved; even when yanked by a four-wheel drive truck pulling on heavy chains tied around these humming metal boxes that are still appearing as of Feb. 8 up and down West Coast beaches." In another report, this isn't first time similar metal boxes have turned up on beaches associated with UFO sightings, "the British government also photographed similar huge metal boxes on beaches in Sri Lanka in the late 1990’s and in early 2004 and 2005." Why are the boxes too heavy to move? What's inside the boxes that's humming?