cnn guest says bpa is good for you 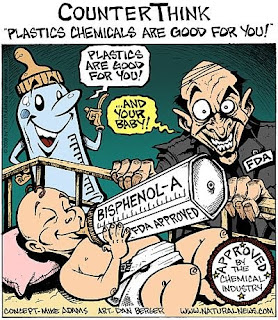 from matt ryan: Dr. Whelan, during an interview on CNN, states there are misconceptions about chemicals. One such misconception is that no cases (to her knowledge) exist where a single child or adult has been harmed from trace chemicals in products. She goes on to say that claims of such are absurd, citing the long-term existence of BPA (Bisphenol A) as an example of a harmless trace chemical. Her primary source of reference in declaring BPA safe is the FDA.

Ken Cook, president of the Environmental Working Group, countered by stating that there is strong evidence that trace chemicals have indeed caused health risks and that BPA has been listed as a substance that is being reviewed as potentially harmful by multiple review boards including the Environmental Protection Agency. While the FDA may deem something safe, the same was once said for lead paint and cigarettes.

While Dr. Whelan may not have heard of any such cases where trace chemicals like BPA have caused health issues, the evidence is overwhelming that the risk is present. The Los Angeles Times published a report indicating concerns rooted in the fact that BPA penetrates several layers of skin on contact and may enter the bloodstream at toxic levels. The Guardian also published an article linking BPA in plastic bottles to lower sperm counts in men. Mercury News even covered the effects of low amounts of BPA on lab animals.