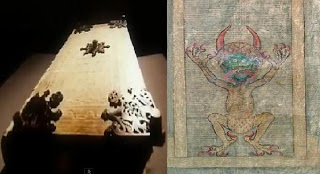 The Codex Gigas, known also, as the Devil's Bible contains a full page drawing of Devil (pictured), which cast suspicion in past on the medieval manuscript.  An informative io9.com article explains "Gigas is Latin for giant, so the translation of the Codex Gigas is 'giant book'...Within the codex is the sum of the Latin Vulgate Bible at the time, along with several contemporary histories, a comparative alphabet, medical texts, a calendar, and a few spells...The codex is thought to be from a Benedictine monastery of Podlažice in the modern Czech Republic (then called Bohemia), but the codex became a spoil of Swedish Army after the Thirty Year's War."

The Devil's image appears to be for representational purposes only - not worship. The Codex also lacks demonic content, and according to article, believed to be "...the last of a dying breed - one of the final single volume handwritten copies of the Old and New Testament created before moving to an easier to replicate (and carry) multi-volume format." The entire Codex Gigas is available online at the National Library of Sweden website. You may view "Codas Gigas - Devil's Bible," in under two minutes on You Tube.