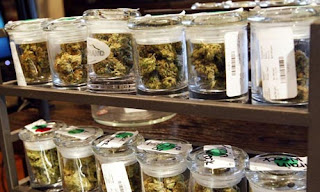 from reuters.com: Colorado and Washington became the first U.S. states to legalize the possession and sale of marijuana for recreational use on Tuesday in defiance of federal law, setting the stage for a possible showdown with the Obama administration.

But another ballot measure to remove criminal penalties for personal possession and cultivation of recreational cannabis was defeated in Oregon, where significantly less money and campaign organization was devoted to the cause.

Supporters of a Colorado constitutional amendment legalizing marijuana were the first to declare victory, and opponents conceded defeat, after returns showed the measure garnering nearly 53 percent of the vote versus 47 percent against.

"Colorado will no longer have laws that steer people toward using alcohol, and adults will be free to use marijuana instead if that is what they prefer. And we will be better off as a society because of it," said Mason Tvert, co-director of the Colorado pro-legalization campaign.

Supporters of Washington state's pot legalization initiative declared victory after the Seattle Times and other media projected a win for marijuana proponents.

"The voters have spoken and we have to respect their will," Colorado Governor John Hickenlooper, a Democrat who opposed the measure, said in a statement. "This will be a complicated process, but we intend to follow through."

He added: "Federal law still says marijuana is an illegal drug, so don't break out the Cheetos or gold fish too quickly."

The Obama administration has recently pressed an enforcement crackdown against pot dispensaries and greenhouses deemed to be engaged in large-scale drug trade under the pretense of supplying medical cannabis patients in California and elsewhere.