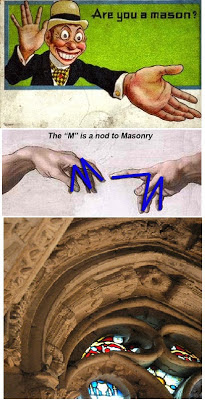 Columbus Discovered America In 1492 – Not!

The Atlantean Conspiracy dispells illusion of American History that Christopher Columbus discovered America.   In 1492, Columbus didn't discover but only unveiled its existence to wider public, so exploitation of New World could begin in earnest.  Eric Dubay, author of The Atlantean Conspiracy, maintains secret societies, primarily, Freemasonry and its' precursors possessed knowledge of the Americas for thousands of years. A masonic handsign making letter "M" (pictures) is a nod to secret order of Freemasonry.  Dubay quotes David Icke from "The Biggest Secret" to make his point:


“'The official story that Christopher Columbus discovered the Americas is ludicrous. A few miles from Edinburgh in Scotland today still stands Rosslyn Chapel, that holy grail of the Brotherhood Elite. It was built in the shape of a Templar cross by the St Clair-Sinclair family and is a mass of esoteric symbolism. The foundations were laid in 1446 and it was completed in the 1480s. How remarkable then that the stonework at Rosslyn includes depictions of sweetcorn and cacti which were only found in America and Christopher Columbus did not ‘discover’ that continent until 1492! How could this be? There is, in fact, no mystery. Christopher Columbus was not even nearly the first white person to land in the Americas. The Phoenicians, Norse, Irish, Welsh, Bretons, Basques and Portuguese, all sailed to America before him and so did Prince Henry Sinclair of Rosslyn, as documented in a rare book by Frederick I. Pohl called Prince Henry Sinclair’s Voyage To The New World 1398. Sinclair made the journey with another Brotherhood bloodline, the Zeno family, one of the most prominent Black Nobility families in Venice. Sinclair and Antonio Zeno landed in what we call Newfoundland and went ashore in Nova Scotia (New Scotland) in 1398 … The Brotherhood had known about the Americas for thousands of years and Christopher Columbus was used to make the official discovery so that the occupation of the Americas could begin.'"

The Rosslyn Chapel with its ornamental corn and cacti plants found only in the New World, seems to cinch case.  It appears Prince Henry Sinclair returned in 1398 with hidden knowledge of flora from the New World.  A history lesson exposed as a put-up job!