Comets and Coherent Catastrophism: Elenin and Great Comet of 1811 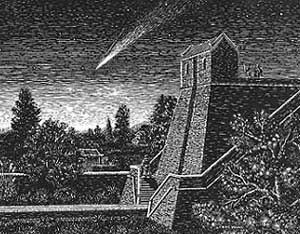 Are there similarities between the Great Comet of 1811 and Elenin? There is a buzz on the net about parallels between the two comets such as flooding, low sun activity, a cold winter and earthquakes.

“Most geologists and scientists believe that most earthquakes occur during new and full moons. With new moons the most likely. But when you have new and full moons on days that also equal their apogee or perigee, then you have a ‘supermoon’, this is what some of them, Jim Berkland for example, believe is the window for the most dangerous…in Oct., we have a full moon on the 11th, with the moon apogee on Oct 12th. We have a new moon on Oct 26th, but we also have the moon perigee on, yep, Oct 26th. Now, the JPL say that comet Elenin will make its closest approach on Oct 16th. Right in the middle of the full and new moon and the apogee and perigee, leading up to the 26th that is the new moon, perigee, and passing comet all on the same day. Not saying it means anything but kinda makes you wonder?” The last observations do make for an interesting October! Comet Elenin reaches closest approach to Earth on Oct. 16th in the middle of the full and new moons, apogee and perigee, which provide additional gravitational stresses on a heavenly body such as a comet. An event where the Earth crosses a comet’s path leads to a hypothesis called coherent catastrophism.

The hypothesis attempts to account for past destruction observed on the Earth and Moon.   Catastrophism is an idea the inner solar system is subjected, at times, to destructive events as a result of incoming comets from the Kuiper Belt and Oort Cloud. The comets are drawn into the inner solar system due to a black hole at the Milky Way’s center.   An increased gravitational force is exerted by the black hole as our solar system crosses the galactic ecliptic. More specifically, it’s a hypothesis that gravitational forces due to alignments break up a comet and fragments impact the Earth over a short period of time with cataclysmic results. It’s termed coherent because several “impactors” result from the breakup of a single object and arrive together over a short time span.

Is this the real terror behind the Elenin hype? Indigenous peoples throughout history have considered comets as harbingers of evil. Are we to experience a comet apocalypse in October? Are there possibly other agendas at work with ulterior motives such as the need to build a defensive response to destroy Near Earth Objects (NEOs) that threaten us with destruction?