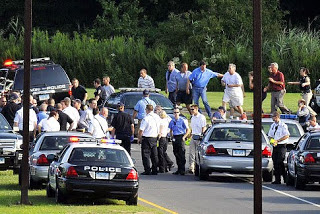 murder/suicide: "how could someone do this?"

from ap: A high-ranking union official says a man who fatally shot eight co-workers and himself at a beer distributorship in Connecticut had been caught on videotape stealing beer. Union officials say Omar Thornton had worked as a driver for a couple of years and had been called in for a disciplinary hearing Tuesday and asked to resign. He instead opened fire at a warehouse in Manchester. The mother of Thornton's girlfriend says he had complained of racial harassment and that his bosses had not responded. But a union official tells The Associated Press that Thornton had "made no complaint of racism to us or to any federal or state agency." Teamsters Local 1035 official Christopher Roos says Thornton was "a disgruntled employee who shot a bunch of people."