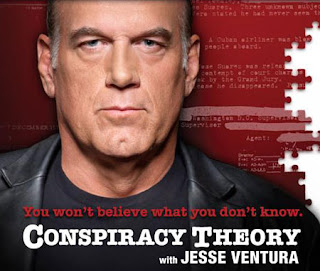 Conspiracy Theory Area 51 episode with Jesse Ventura provides little known facts about the secret base in Nevada's desert. Mutual UFO Network (MUFON) director Clifford Clift believes there are approximately a dozen alien spacecraft in human hands. Area 51 has thirty levels below ground and most employees fly in from Las Vegas daily. There's also reference to the Area 51 Lawsuit filed by attorney Jonathan Turley for employees exposed to toxic substances, which resulted in the public learning more about the secret base. Randall Fitzgerald, a former editor at Reader's Digest, makes perhaps the biggest impression, when he relates witnesses reported "a wavy distortion in the sky" during the 1997 Phoenix Lights phenomenon. This account of the UFO(s) over Phoenix transits the episode into entirely different direction, following a psyop theme. Fitzgerald adds documents were declassified not long after the event, admitting the government deceived the American people about UFOs, encouraging the belief. Fitzgerald wonders if the lights were holographic in nature, i.e., planes equipped with holographic projection equipment and makes clear the source, in his belief, is Area 51? Your mind reels, asking yourself, which is the psyop?