covert US-China space wars: 2012 and beyond 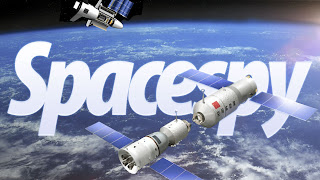 Readers must challenge imaginations to resist media attempts to set terms of discussion! BBC caused a recent flap with article, "X-37B spaceplane 'spying on China'," observing X-37B and Tiangong 1 are in very similar orbits! There is, also, tantalizing mystery what remains hidden behind closed payload doors, the BBC article suggests sensor suites to be deployed in a new space-to-space surveillance game!  The response by many sources like Space on MSNBC.com offered similar arguments, "...the X-37B and Tiangong 1 have broadly similar orbits. Both are currently about 180 miles above our planet, with an inclination of roughly 43 degrees with respect to the equator (meaning their orbits range from 43 degrees south latitude to 43 degrees north latitude."

"However, the orbits of the X-37B and Tiangong 1 differ greatly — by about 100 degrees — in a parameter called right ascension, which describes where a craft crosses the equator, Weeden said. So the two satellites actually take disparate paths around the globe, with their orbits intersecting just twice per circuit." The present writer suspects twice per circuit sufficient, while maintaining plausible deniability. How many circuits are completed in just a day?

This analysis may be wrong-headed and inaccurate. Yet, it should be assumed, Pentagon will follow credo of seeking upper hand in any possible war theater! Readers should recall objections raised by Russia and India in 2010, when X-37B first launched! The rumor floated of a spy probe, which could be deployed from payload doors, to attack and disable orbiting satellites! How about just a good old surveillance bug in a much larger room called Space? Would a spy probe even need to attach to its target, but rather shadow it from a safe but still relatively close distance?

The defensive response to BBC article sends up red flag this is a sensitive area of contention! Readers must keep their minds open to thinking outside the box! What will be hidden behind payload doors of X-37C slated for 2014? X-37C is twice the size of its predecessor! The US and China are making every attempt to spy - don't kid yourselves!