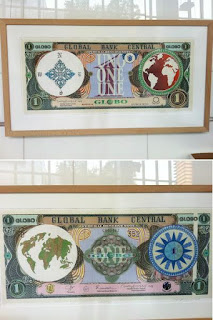 Creepy One World Artwork at the World Bank HQ

The "artwork" (picture) on display at World Bank Headquarters in Washington D.C., raises eyebrows as it appears to represent concept for front and back of a global currency:  a globo..    Does it represent ultimate aspiration for international bankers?  A single global currency would influence every country and nearly everyone,  making outside transactions increasingly difficult.  The bankers could directly influence nearly all of the world's business transactions. It should alleviate anyone concerned, who still harbor doubts about the existence of a global conspiracy for totalitarian one-world government or a "New World Order." Please move along there's nothing to see here!