Crop Circles Made By Laser Tech 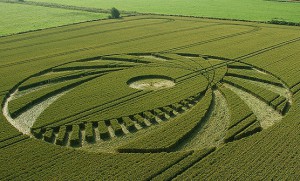 World News Tomorrow article reveals crop circles may be made with well-known laser – not alien technology.

“New information has emerged that indicates that this phenomenon might not have been made by aliens, but rather aliens of a different kind closer to home, namely the home of England’s MoD. …Crop circles have become the subject of speculation… but unfortunately it points to a technology we all know so well – Laser Technology,” reports article.

The British launched “one of the few” satellites equipped with a laser in 1971, “the Ariel 5 X-ray satellite, that passes over the Stonehenge area, with a radius of 40 miles, on regular intervals. This would of course explain why the Crop circles have appeared within the 40 mile radius since the 1980′s, and have never been found outside of its’ ‘footprint’.“

How does the technology work?

“The process is similar to the normal laser cutting process that is used to make a picture on metal by precision computer measuring cutting technology developed by Nikon, except here the non visible laser beam doesn’t cut but rather suppresses a pre-programed imprint of the image onto the surface, in this case, the grass. This would explain a number of questions asked with absolute precision and accuracy.“

The above explanation makes so much sense, especially Ariel 5’s satellite orbit over areas of the United Kingdom where crop circles are so often discovered!

One response to “Crop Circles Made By Laser Tech”