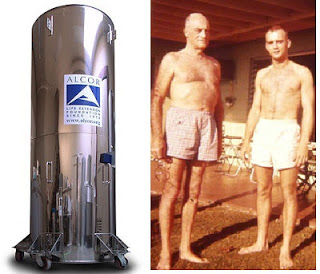 Cryonics as Evidence of Psychological Malady

Cryonics represents, on the surface, a noble endeavor meant to preserve human knowledge and extend lives.  It seems a shame to lose an entire lifetime's accumulation of experience.  Fred Chamberlain (right-hand side, picture right), cryonics pioneer, and a founder of Alcor in Scottsdale, AZ represents two generations of true believers in life extension through quick freezing  bodies, or if a neuropatient, only the head.  Chamberlain tucked away his father (left-hand side, picture right) back in 1976.  A bigfoot Dewar canister designed for preserving four whole body patients is pictured (left). The Alcor founder died - or chronopaused - earlier this year.   A homage to Chamberlain provided by younger protege' Mike Darwin, "Bon Voyage, Fred Chamberlain," portrays a lifetime focused on overcoming death - the ultimate human limitation! Yes, Chamberlain did write poetry and played guitar but an organizing principle of overcoming death hints at deeper drives.  Is it admirable or selfish to desire death's defeat?  Is it egotistical or worse a symptom of megalomania?  Are there more subtle approaches, actually, superior to hacking off a head and freezing to -385 degrees fahrenheit?  Chamberlain had little confidence, himself, in custodians given responsibility to tending to needs of "cryonauts" while in "biostasis." Ted Williams incident at Alcor, where employees abused the baseball great's head, seems to only confirm Chamberlain's suspicions.

Mike Darwin reveals what Chamberlain experienced with cryonics in California:

"Fred came on the scene in cryonics in what was unarguably its darkest hour. It had degenerated into little more than a fraudulent cult in California and, everywhere in the US, it had lost all vestiges of technical and scientific rigor. When Fred discovered this in his role as Vice President of the Cryonics Society of California (CSC) he not only left CSC and founded Alcor [in 1972], he and Linda Chamberlain established, for the first time anywhere, the practice of scientific, evidence-based cryonics..."

The depth of feeling perhaps rises to the level of malady as Darwin attempts to console Linda, Chamberlain's spouse and co-founder on her spouse's present chronopause status:

"But remember Linda, it was just yesterday that we planned for this day now so soon arrived – a plan that has been, as we so rightly foresaw, flawlessly executed. Now, let us be patient just a “little” while longer, and work again, just a “little” bit harder, so that we can awaken tomorrow, and find that that other day that we talked about, dreamed about, planned for and worked towards has also arrived, in which we find ourselves together again – not in “paradise,” but in this world, planning for, thinking about, talking about and working towards those other dreams that we had to put on hold, simply in order to survive."

The present writer preserves healthy skepticism whether cryonics represents best route in pursuit of life extension!  Cryonics may fall away just as other "medical beliefs" have in the past such as  lobotomies and bloodletting?  It may also represent something worse, another scam to empty pockets even after chronopause - err, death!