‘The Cryptoterrestrials: A Meditation on Indigenous Humanoids and the Aliens Among Us’ 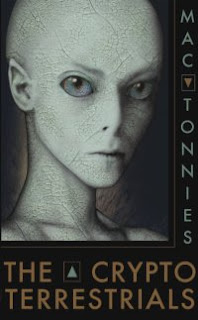 Is there a superior race who lives among us? Are they a fragile and sickly lot with high cheekbones and large eyes? Have they interbred with us in an attempt to reinvigorate their kind? Do they deceive us into serving them, in other words, enslaved us? Mac Tonnies, a young writer, looks for them in a posthumously published book, "The Cryptoterrestrials." Cryptoterrestrials (CTs) are viewed similarly to and get categorized in with the Ultraterrestrials of authors Jacques Vallee and John Keel. Ken Korczak summarizes the details in "Ultraterrestrials: Do They Walk Among Us?" CTs engage in deception, it's suggested, as a series of ruses to cover true vulnerabilities. A review of Tonnies' book suggests our co-inhabitants are challenged on a couple of fronts: "(A) the appearance of a "debilitating genetic syndrome" that ravaged their society; and (B) the rising infestation of a violent species that threatened to eclipse - in number - their own society." Filmmaker Jay Weidner and author Anthony Sanchez offer their views on "the Cryptos" in a recent Project Camelot interview (at 1:00 hour mark). Weidner believes aliens are only concerned with keeping their existence hidden and profiting off of humankind - that's it. Weidner and Sanchez believe Cryptos are capable of capricious acts of violence in pursuit of their goals. Sanchez believes he's been recently poisoned by a Crypto and Weidner suggests Sanchez may be getting too close? Mac Tonnies passed away in 2009 from cardiac arrhythmia at the age of 34, you wonder if he was getting too close? You can view Tonnies' thoughts on CTs in a  brief 2006 interview below.