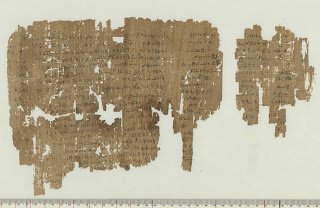 from livescience.com:  A recently deciphered Egyptian papyrus from around 1,900 years ago
tells a fictional story that includes drinking, singing, feasting and
ritual sex, all in the name of the goddess Mut. Researchers believe that a priest wrote the blush-worthy tale, as a way
to discuss controversial ritual sex acts with other priests. "Our text may represent a new and hitherto unrecognized Egyptian
literary genre: 'cult' fiction, the purpose of which was to allow
controversial or contentious matters pertaining to the divine cult
to be scrutinized in this way," wrote professors Richard Jasnow and
Mark Smith, who published their translation and analysis of the papyrus
in the most recent edition of the journal Enchoria Jasnow, from Johns Hopkins University, and Smith, from Oxford, write
that evidence of ritual sex is  rare in ancient Egypt and the act
probably would have been controversial. "There is surprisingly little
unequivocal Egyptian evidence for the performance of the sex act as such
in ritual contexts," Jasnow and Smith wrote. They added that the Egyptians were known to discuss other controversial matters using fictional stories.